The Helix Metalfit 2.0 is a smartwatch that offers a lot more than your average fitness watch, with its compatibility for Android and iOS devices as well as the ability to connect to even more apps in the future. The device can track steps, distance traveled, heart rate variability, help monitor sleep quality among other things but does it go too far? 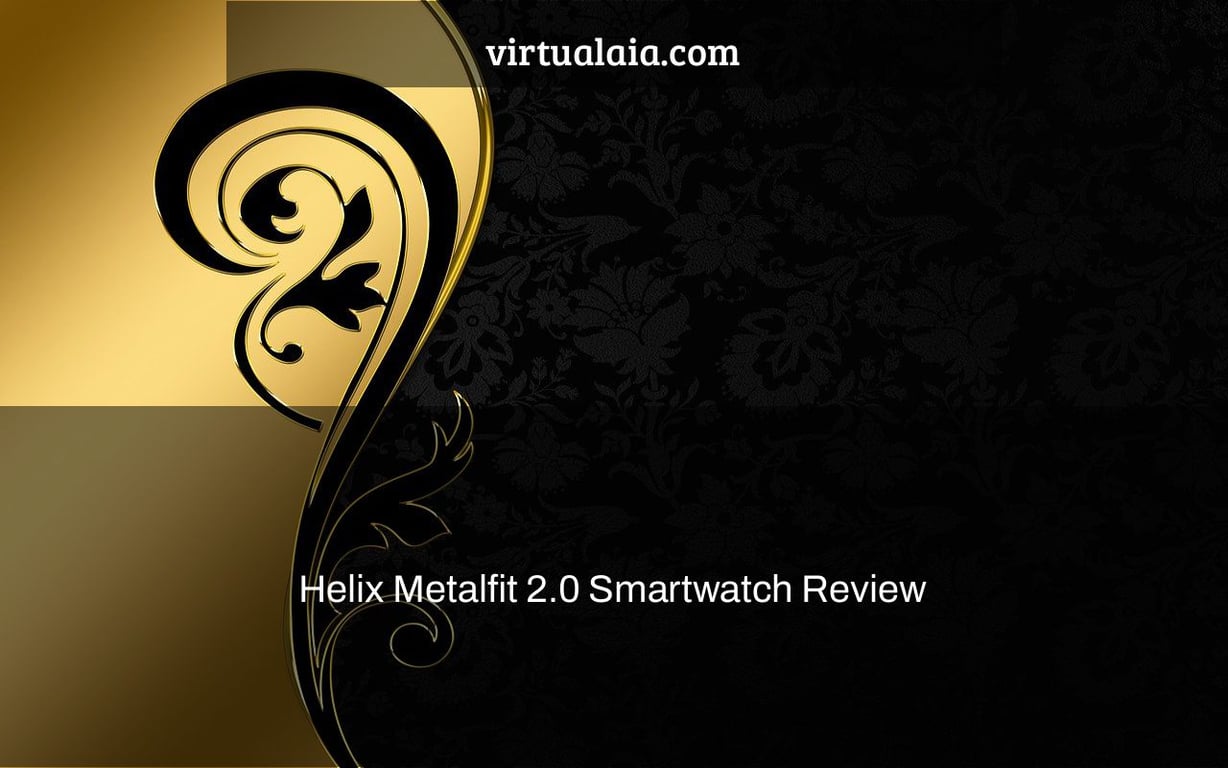 In this post, we’ll give you our thoughts on the Timex Helix Metalfit 2.0 Smartwatch, which was just released in the Indian market and costs Rs. 3,999. Despite the fact that the smartwatch is aimed at the cheap market, the list of functions it offers is pretty extensive, and the Helix Metalfit 2.0 has a lot to offer its customers.

Our first impressions of the watch were positive, and the specs sheet suggests that, given all the smartwatch has to offer, it may be the greatest offering in the budget market right now. But how does the Helix Metalfit 2.0 hold up in practice? Is it suitable for everyday use? In this review, we’ll learn more about it. So, without further ado, let’s get started with the review.

Contents of the Box

Let’s start with the in-box stuff, which consists of just the essentials, such as the Metalfit 2.0 smartwatch and a charging station. The magnetic charging port is more convenient to use in everyday life. In addition, you will get some basic papers to peruse in your own time. That concludes the in-box material. 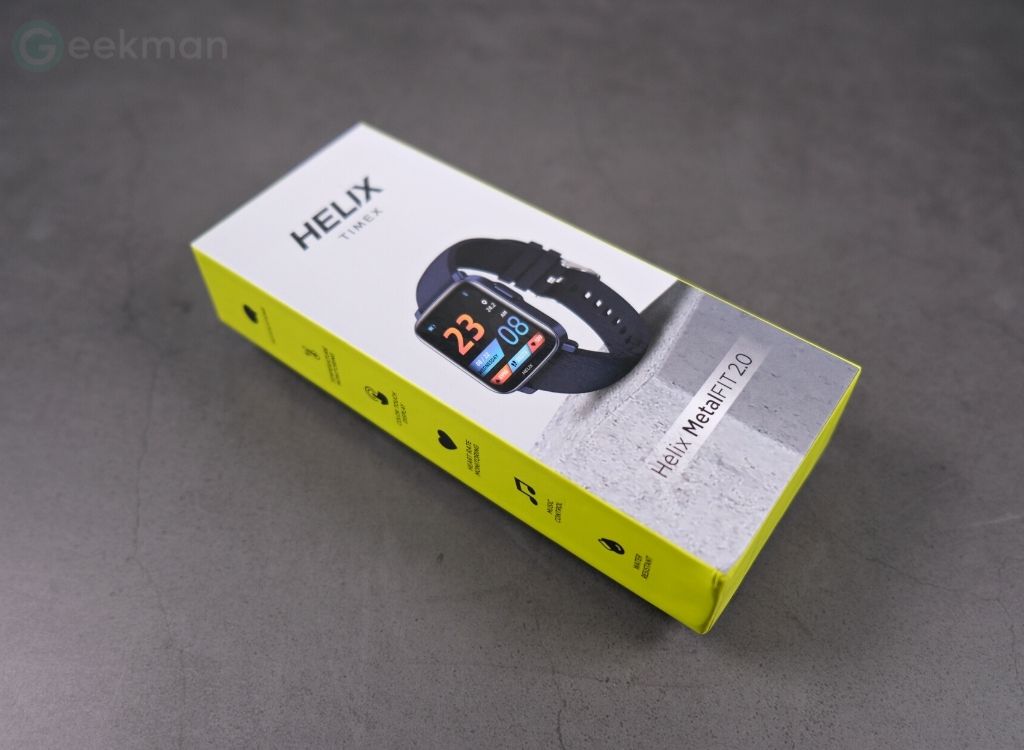 Helix is a well-known watchmaker whose brand speaks for itself, and the Metalfit 2.0 smartwatch’s design demonstrates why it is so popular. The Helix Metalfit 2.0’s tiny and lightweight design is the first thing you’ll notice about it, making it an extremely practical and easy-to-use smartwatch that you can wear for long periods of time without pain. The fact that the smartwatch has metal bands while yet feeling lightweight shocked us. The smartwatch’s entire weight with the metal bracelet is about 45 grams, which is rather light. As a result, we must give Helix credit for the same. 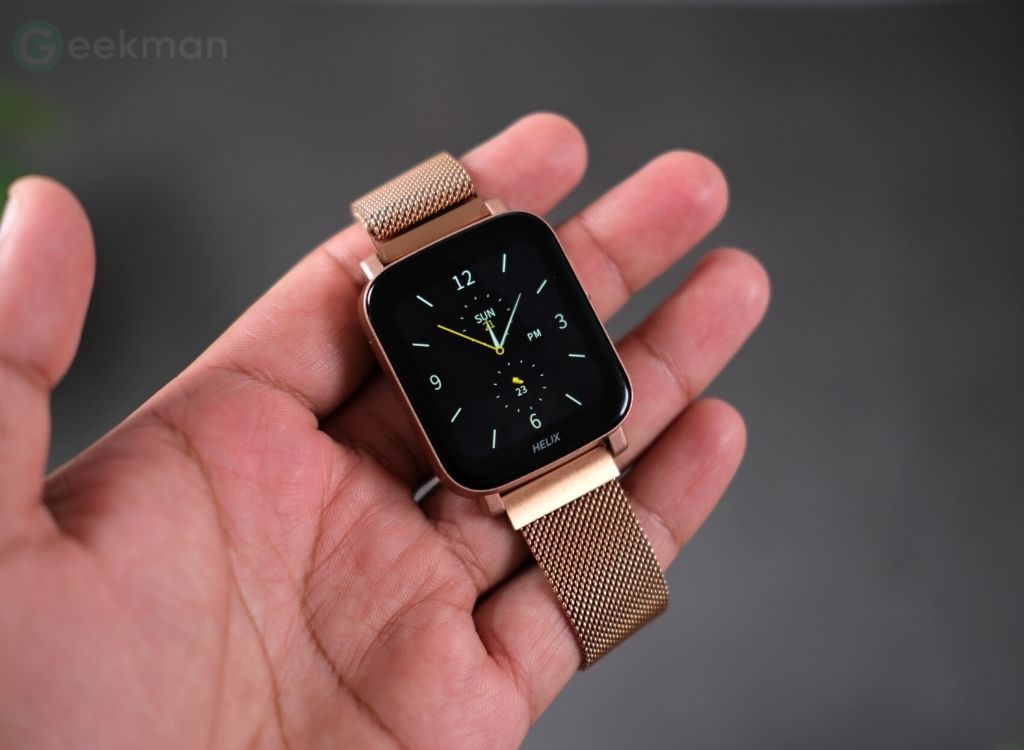 However, we can’t award the Helix Metalfit 2.0 full scores for design since the metal straps aren’t very comfortable, and the color scheme is a little wrong. To be honest, the color palette disappointed us, and we imagine it would have turned off many people. The advantage here is that you may select from a variety of color choices, including black, blue, and silver, for the normal Silicon straps.

The smartwatch has an IP67 certification, which means it is waterproof in certain areas. This means you don’t have to take off your watch even while you’re in the shower. Because the wristwatch is dust and scratch resistant, you may use it even while doing outside activities, such as playing outdoor games. The wristwatch also has a water resistance rating of up to 3 meters, so you may use it while swimming. 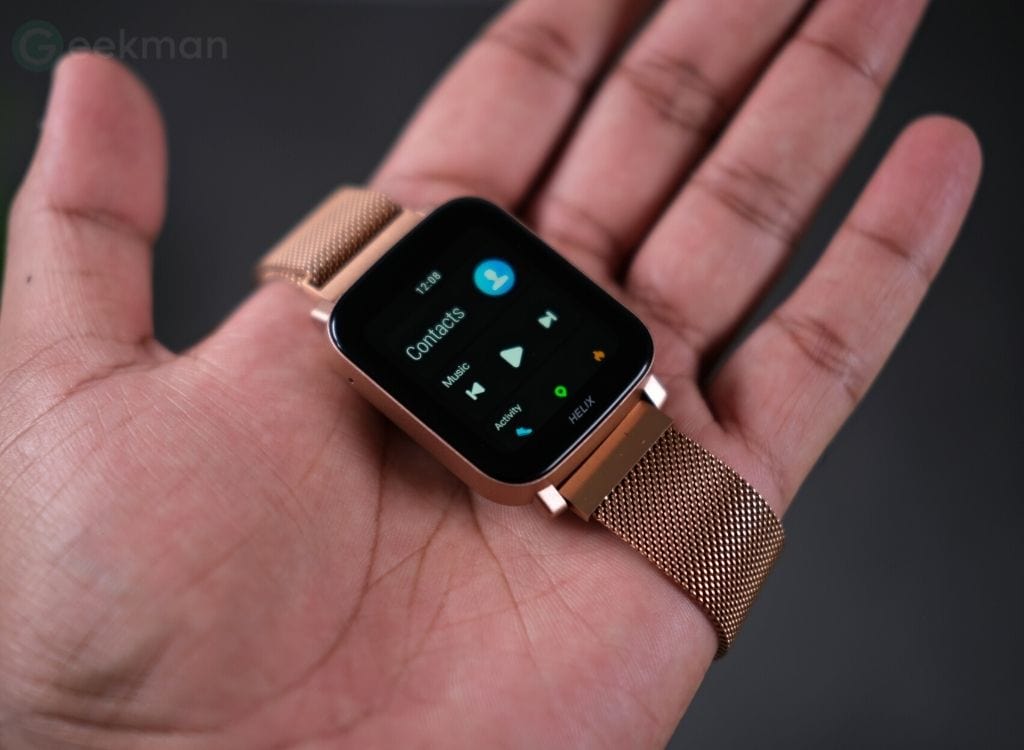 The magnetic locks are built into the straps, which increases the device’s use, which is a positive thing. We’d like to add one more point here: most smartwatches introduced in India have a substantial amount of weight to them since they are not developed with women in mind. This is not the case with the Metalfit 2.0, which, thanks to its small and lightweight design, can be worn by both men and women without difficulty.

Faces for the Display and the Watch

The Helix Metalfit 2.0 smartwatch comes with a 1.52-inch full capacitive IPS LCD touchscreen display with a resolution of 360 x 400 pixels. The display is responsive, and it allows both taps and swipes for a seamless user experience. Despite the fact that it is a cheap smartwatch, the display quality is fairly outstanding, and there aren’t many smartwatches in this class that can compete with the Metalfit 2.0 in terms of pure display quality. 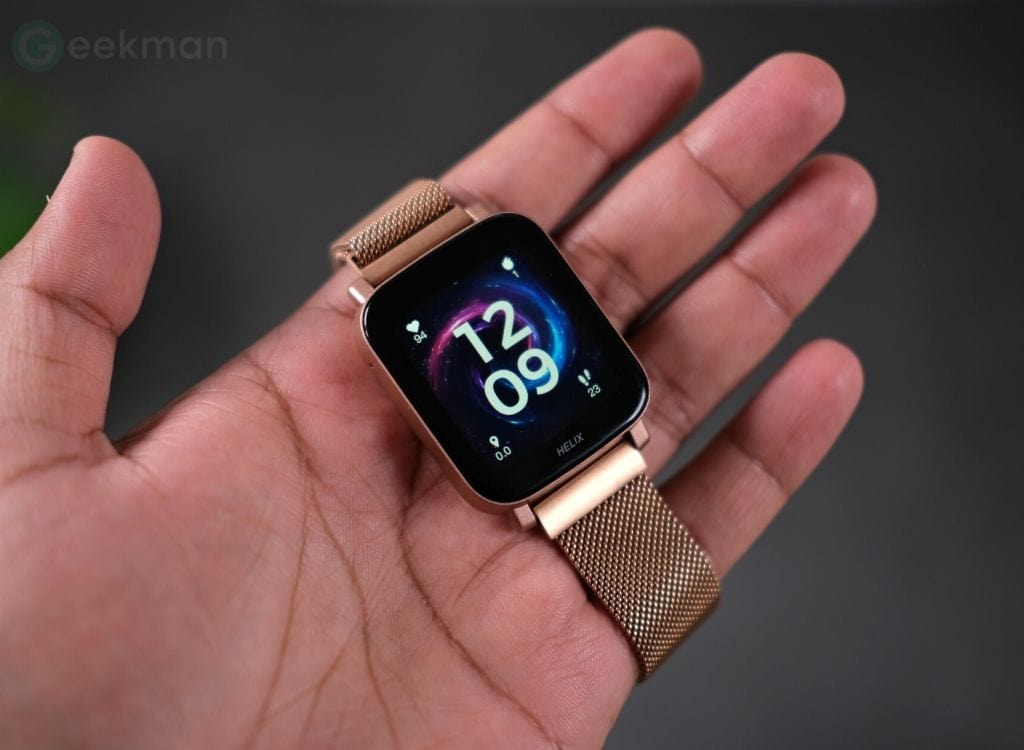 Yes, the bezels around the screen are a little thicker than they should be, but this isn’t a problem since it doesn’t detract from the smartwatch’s overall appearance. When not in use, the screen seems to be entirely black, and the all-black UI makes using Metalfit 2.0 much simpler. Overall, the display quality is excellent, and the viewing angles are sufficient for everyday usage. 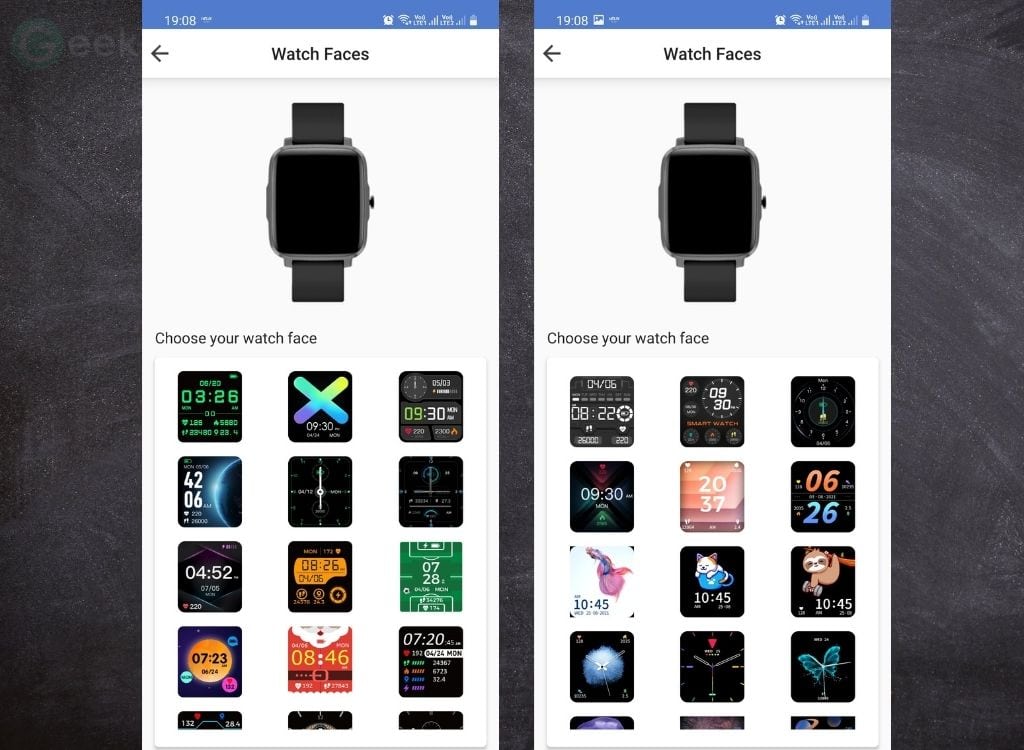 The smartwatch has more than 50 distinct watch faces to pick from, four of which are built into the watch itself and the rest can be accessed through the smartphone app. The program has a lot to offer, and you can probably anticipate more features to be introduced in the near future. You do not, however, have the option of personalizing watch faces at this time.

When it comes to the user interface, it is straightforward to use, clean, and free of clutter. If you’re acquainted with Helix MetalFit 1.0, you’ll recall that the user interface was not very attractive. However, Helix’s user interface has been improved, and it now feels much better. A sharper display and better-looking icons on the wristwatch might be one of the main reasons behind this. Overall, the UI is highly engaging, and you should have no problems using it on a daily basis. 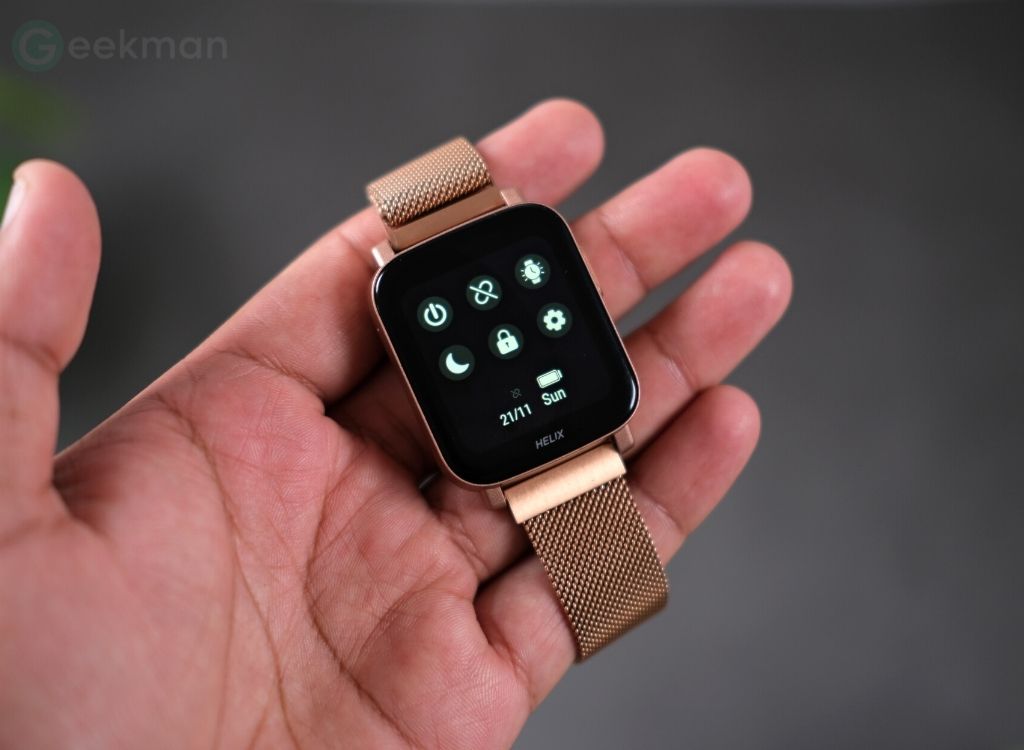 The Metalfit 2.0 lacks a lot of animations, which might be a positive thing since it means there will be less animation latency, which is a regular issue with inexpensive smartwatches. However, you’ll still notice occasional lags and delays when swiping or tapping icons, demonstrating the lack of significant processing capability. Despite the fact that the operations aren’t buttery smooth, you won’t have any serious issues in routine day-to-day usage, and you’ll have to accept it in the budget smartwatch market.

The touch responsiveness is adequate, and the programs do not take an inordinate amount of time to load. The Metalfit 2.0 has a single button that functions as the primary menu button as well as a back button.

The Metalfit 2.0 is an excellent alternative for you if you want a smartwatch that not only warns you about incoming calls but also allows you to answer such calls. Because the wristwatch comes with just a single speaker and an in-built microphone, this is the case. This combination would make it simple for you to answer calls. However, when compared to earbuds or headphones, you can’t expect your calls to be as seamless, and expecting exceptional call quality is a little too much to ask. However, this does not imply that the call quality is unacceptably poor, and the arrangement will suffice if the need arises. The speaker quality is excellent, and it will come in handy when you need to utilize the voice assistant. Aside from that, the speaker may come in handy when you want to listen to your favorite music while working out or in the shower. 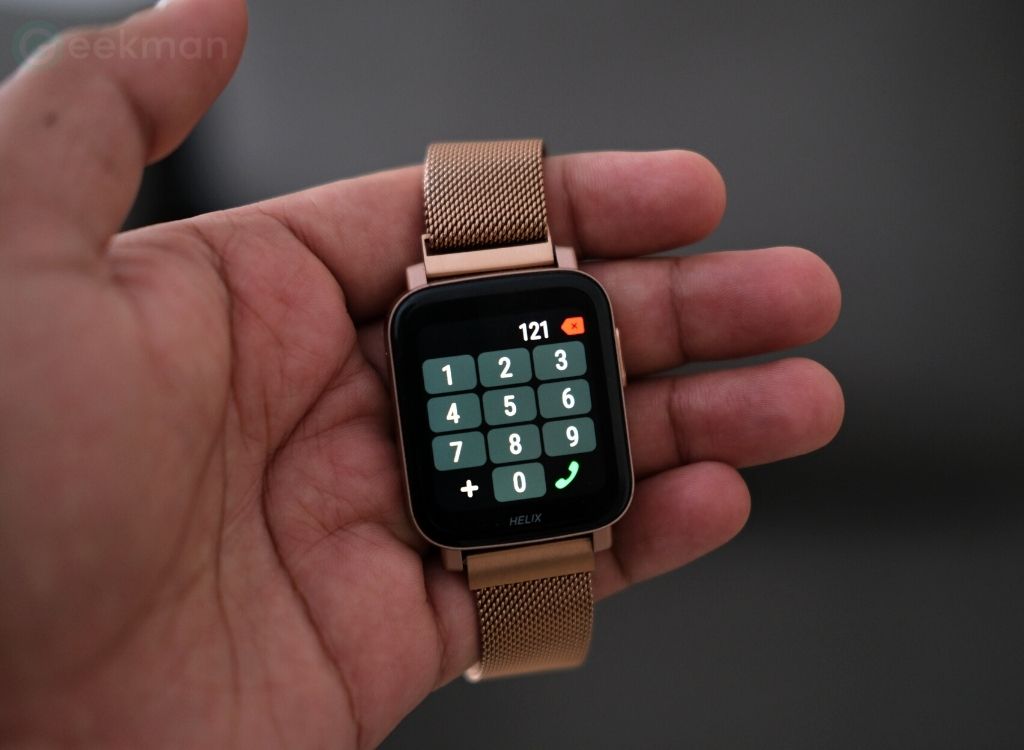 One of the primary reasons why people use smartwatches is to monitor their physical activity, and the wristwatch has many of features to aid with that. The Metalfit 2.0 offers 10 specific sports modes that enable you measure physical activities like Running, Walking, Cycling, and others with remarkable accuracy and precision. These sport modes would enable you to keep track of the distance traveled, the amount of time spent, and the number of calories burnt when participating in those activities. We found the step tracking function to be a little unsynchronized, despite the fact that these athletic modes operate nicely. It was presenting the step count to be a little more than it needed to be, but this is easily fixed with simple software adjustment and updates. Other than that, there are no significant issues. 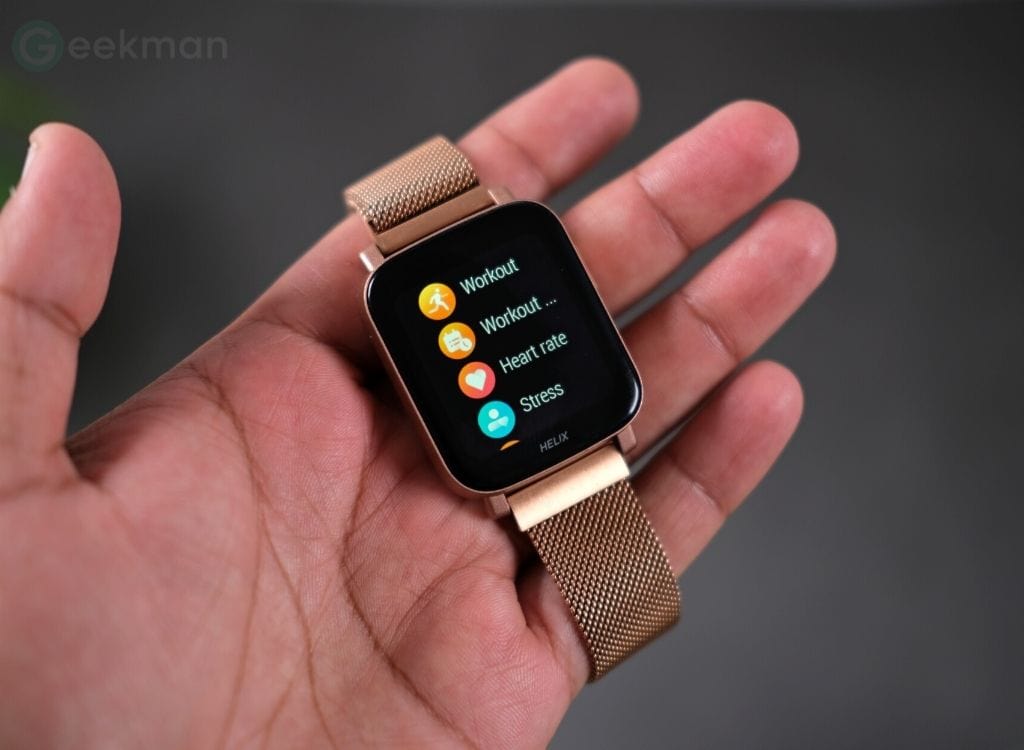 Aside from that, the Metalfit 2.0 wristwatch also has stress and women’s health monitoring features. You may also use a breathing timer to help you relax as you meditate. The Helix Metalfit 2.0 smartwatch also comes with a variety of features, including camera and audio controls. You can also receive weather information, a timer, an alarm, a stopwatch, and a locate my phone option, which might come in in if a situation arises. 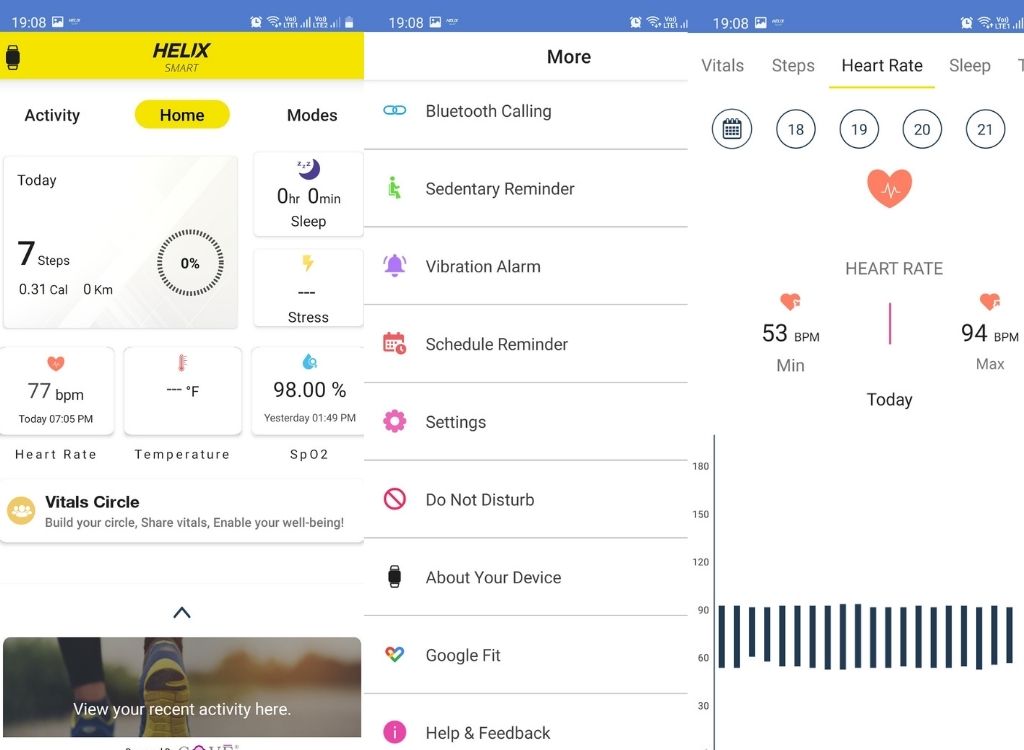 The Helix Smart Application, which is available for both Android and iOS devices, can retrieve the data from these sensors. All of the data is shown independently, and you will have no trouble using the program. We saw no problems or glitches with the program while using it, and it worked well. You can also link the wristwatch to third-party programs like Google Fit, which is a useful function.

As you can see, the Helix Metalfit 2.0 comes with a lot of health and fitness functions. However, the issue remains as to how precise these monitoring features are. Overall, the smartwatch’s accuracy is adequate, and monitoring tools such as SpO2, Blood Pressure Monitor, and Sleep Monitor operate well and provide somewhat accurate data. 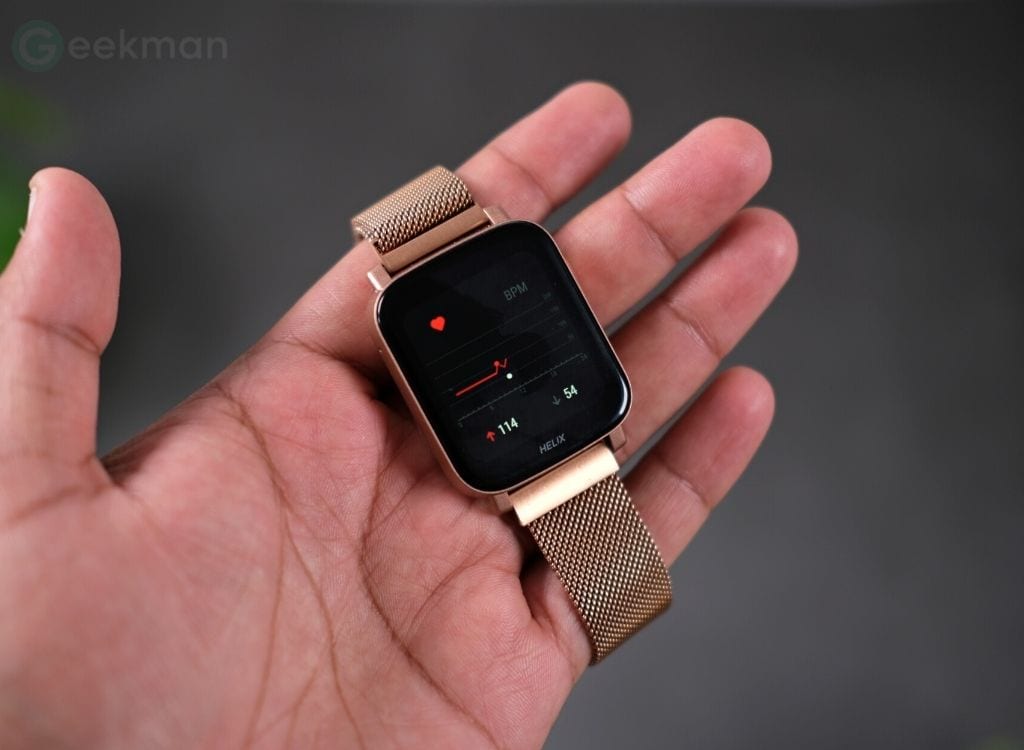 The only item we discovered to be wrong was the step counter, which displayed the number of steps traveled to be somewhat higher than the real data. However, since practically every smartwatch in this market utilizes the same sensor for tracking your steps, this isn’t a serious problem that can be resolved with a software update. They just tweak the program to improve its accuracy. 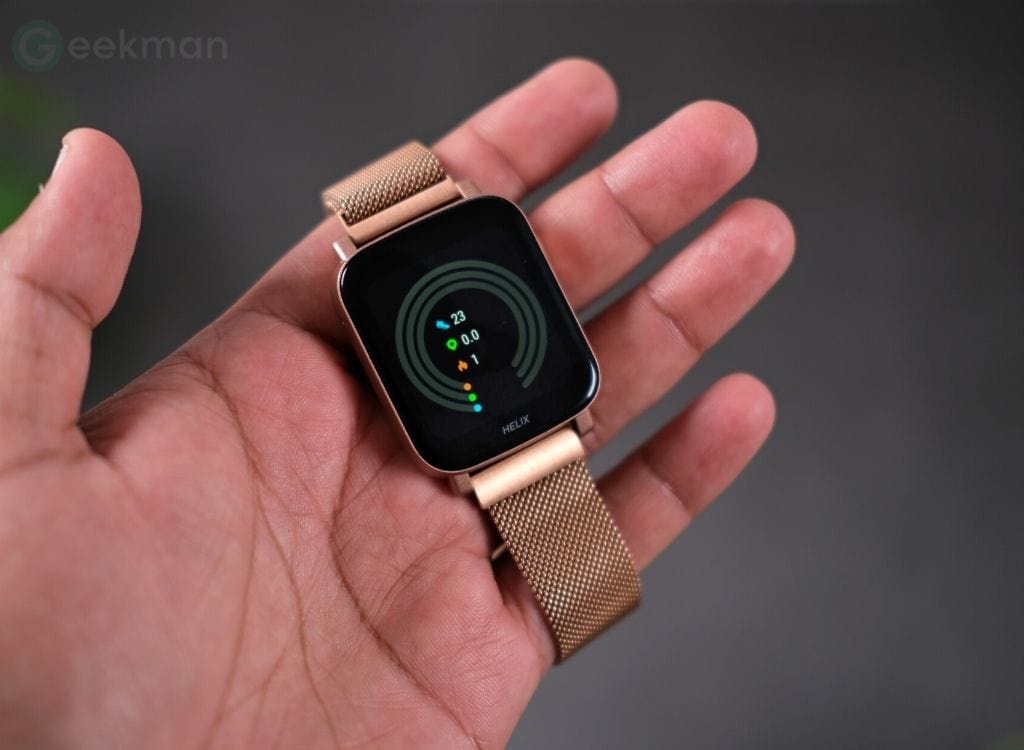 It’s crucial to remember, though, that all of these fitness and health monitoring tools are for your own use exclusively. It doesn’t imply you can use them for medical reasons, and we strongly discourage you from doing so. It’s simply because the wristwatch’s anticipated data isn’t as precise as you’d want for medical needs, and this is true of practically any smartwatch, regardless of price.

Life of the Batteries

According to the company’s information, the smartwatch should last for around seven days if used continuously. During our testing, however, we discovered that the wristwatch lasted for roughly 4 to 5 days on constant usage, and you may anticipate a comparable battery life. Even while the battery life isn’t fantastic, it’s not terrible either. If you are a frequent user, the battery life will not be a problem. When it comes to charging, the smartwatch will take roughly 2 hours to fully charge.

Overall, we thought the Helix Metalfit 2.0 smartwatch to be a nice product, particularly considering the price point. The smartwatch has a variety of functions, some of which are not available on any other smartwatch in this category, and this is what sets it apart from the competition. The wristwatch has a few connection and software shortcomings, but they aren’t serious problems that can be readily fixed with a future software update.

So, should you get this wristwatch or not? If you have a budget of roughly Rs. 4,000 and want a feature-packed smartwatch, the Helix Metalfit 2.0 is a good choice, as long as you like the color combination and style. The smartwatch is an excellent value for money item, and we strongly advise you to get it. On our YouTube channel, you can also see our Helix Metalfit 2.0 Hindi Review. 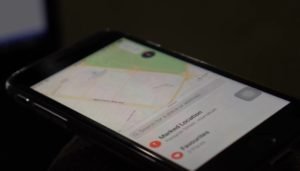